Discord's come to Equestria, and he's turning the My Little Pony Collectible Card Game downside up! The best of friends can become bitter rivals when the Spirit of Chaos is around... and the evilest of creatures might even join your cause. When imaginary friends come to life, Lord Tirek is on the rampage, and chocolate milk is raining from the skies, anything could happen!

Absolute Discord is the name of the fourth set released for the My Little Pony Collectible Card Game.

Blank, Nightmare Star, Solar Flare, and Gummy, Things Just Got Real are "secret" cards such that they are not listed in the set checklist, but they are still part of the set and still have the same chance to be obtained from booster packs as any other card in the set.

Discord, Master of Chaos is a foiled Fixed card released as a teaser in the Discord Collector's Tin product, and is also released as a Common card in the same set.

In addition to the main set, there is also a foil parallel set of 50 cards. These Foil (ƒ) cards are foiled versions of cards found in the main set but are otherwise the same as their main set equivalent. There is a 1 in 4 chance for a Premiere booster pack to contain a parallel Foil cards in place of a Common card.

The promo set of 15 cards cannot be found in booster packs. Of these 15 Promo (P) cards, 9 of them are foiled versions of cards in the main set and 6 are unique to the set. 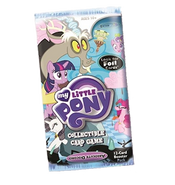 Retrieved from "https://mlpccg.fandom.com/wiki/Absolute_Discord?oldid=40168"
Community content is available under CC-BY-SA unless otherwise noted.