"Turn your eye toward Canterlot and its royal intrigue, and high society. New friends, dazzling parties, and dangerous troublemakers can all be found in Equestria's capital and in Canterlot Nights, a new and exciting expansion to the My Little Pony Collectible Card Game."

Canterlot Nights is the name of the second set released for the My Little Pony Collectible Card Game.

Flutterbat is a "secret" Ultra Rare such that it is not listed in the set checklist, but it is still part of the set and still has the same chance to be obtained from booster packs as any other Ultra Rare in the set.

Princess Luna, The Party's Over and Rarity, Mover and Shaker are Uncommon cards, however they are not found in booster packs and can only be found as part of the Rock N Rave Two Player Theme Deck (making obtaining them similar to how one would obtain Fixed cards).

In addition to the main set, there is also a foil parallel set of 56 cards. Of these Foil (ƒ) cards, 44 of them are foiled versions of cards found in the main set but are otherwise the same as their main set equivalent. There is a 1 in 4 chance for a Canterlot Nights booster pack to contain a parallel Foil card in place of a Common card.

Princess Luna, Princess of the Night and Princess Celestia, Hoof Shaker are part of the foil parallel set but can only be found in theme decks. These two cards each have two different versions with alternate artwork, but are otherwise the same.

The other six Foil cards in the foil parallel set cannot be found in booster packs. Rainbow Dash, Hanging Out and Rarity, Dressmaker can only be found in theme decks. These two cards each have two different versions with one version having the Start side foiled and the other version having the Boosted side foiled, but are otherwise the same. The Foil versions of Applejack, Apple Vendor, Pinkie Pie, Pokey Pony, Twilight Sparkle, Gala Greeter and Fluttershy, Friend to Animals were released in the May 2017 Upgraded Organized Play Kit #1.

The promo set of 19 cards cannot be found in booster packs. Of these 19 Promo (P) cards, 12 of them are foiled versions of cards in the main set, and 6 are unique to the set. Twilight Sparkle, Ursa Vanquisher has been previously released as part of the Premiere main set. 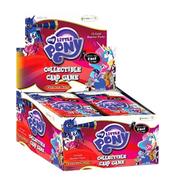 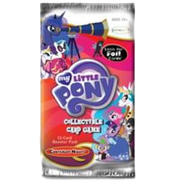 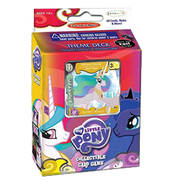 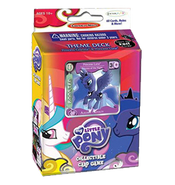