On the longest day of the thousandth year... Twilight Sparkle discovering friendship, Nightmare Moon's attack, saving the Tree of Harmony, Princess Luna's return, all of these historic events took place on the day of the Summer Sun Celebration! Princess Celestia raises the Sun each morning, but once a year all of Equestria parties down and gives thanks to her warm leadership. Whether it's Rainbow Dash clearing the clouds, Applejack catering the food, or Pinkie Pie throwing a surprise party, everypony is here to help out and have fun. But watch out, because an old nightmare just might be back for more...

Celestial Solstice is the name of the second miniature expansion released for the My Little Pony Collectible Card Game; it was released between the Canterlot Nights and The Crystal Games expansions.

Compared to regular expansions, none of the cards in this set can be found in booster packs; they can only be found in the Celestial Solstice Deluxe Set.

10 unique cards were released as part of the main (and only) set: 2 Mane Characters, 4 Friends, 2 Events, 1 Resource, 1 Troublemaker and 0 Problems.

In terms of rarity, the main set contains 8 Fixed (F) cards and 2 Foil (ƒ) cards. Uniquely, all of the cards in the set are foiled despite not all of them having the Foil rarity. 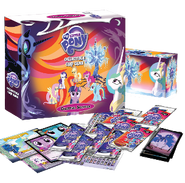