Experience the magic of Equestria and bring your dreams to life with this new My Little Pony Collectible Card Game expansion, HIGH MAGIC! The introduction of Tokens and keywords like Hasty and Persistent bring a whole new dimension to friendship in MLP:CCG, and debut appearances of characters like Moondancer and the Power Ponies bring each game to life!

High Magic is the name of the sixth set released for the My Little Pony Collectible Card Game.

In addition to the main set, there is also a foil parallel set of 4 cards and 3 Royal Rare (RR) parallel alternate-art full-card cards. These Foil (ƒ) and Royal Rare (RR) versions are foiled or full-card (borderless) versions of cards found in the main set but are otherwise the same as their main set equivalent. The Foil (ƒ) cards come on the front of the theme decks and there is a 1 in 108 chance for a High Magic booster pack to contain a Royal Rare (RR) in place of a Common card (average of 2 per case of 6 booster boxes of 36 booster packs).

Each theme deck contains two double-sided Token cards that can be put into play via card abilities. They have a unique Token (T) rarity and card number but are not listed on the official High Magic collector's sheet.

The promo set of 13 cards cannot be found in booster packs. All of these Promo (P) cards are alternate-art foiled versions of cards in the main set (none are unique to the promo set). 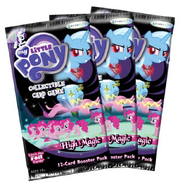 Retrieved from "https://mlpccg.fandom.com/wiki/High_Magic?oldid=36105"
Community content is available under CC-BY-SA unless otherwise noted.