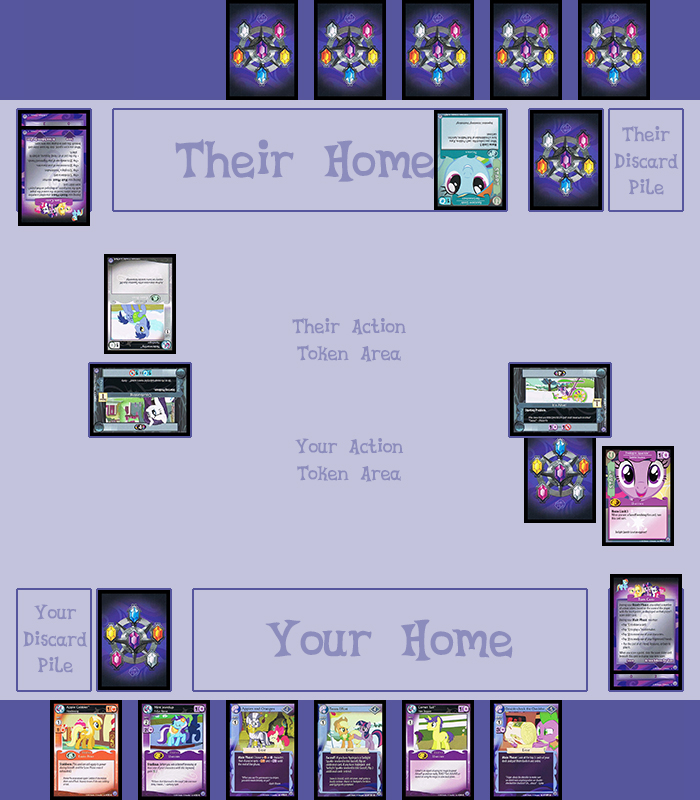 On this turn, John will attempt to be the first player to score some points!

Currently there is a face-down Troublemaker at the It’s Alive! Problem, but it won’t be flipped face-up until Mary's next Troublemaker Phase, so it won't be able to prevent John from confronting the problem.

In order to start confronting the It’s Alive! Problem, John needs to play a Friend card that generates at least 1 non-Purple power. There is only one such Friend card in his hand: Apple Cobbler, Headstrong. 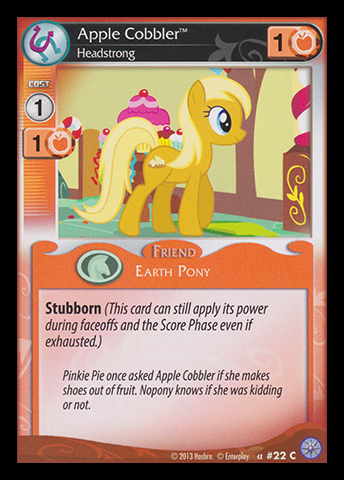 You might notice that underneath Apple Cobbler’s cost of 1 action token, there’s an Orange value of 1. This is the card’s play requirement; how much colored Power you need to already have in play in order to play this card.

Quite the paradox John is facing; in order to play their Orange Friend, they need to already have an Orange Friend in play! Luckily, John has a plan: he spends 1 action token to play the Event card Apples and Oranges, selecting Twilight Sparkle as the event's target. 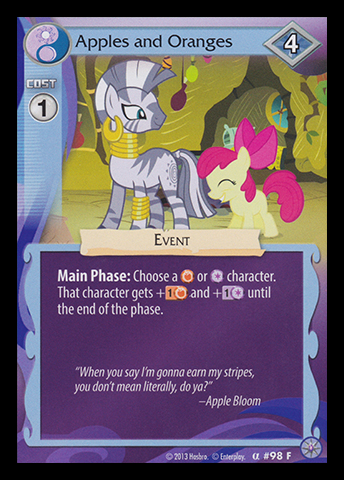 Event cards are single-use cards that, once their effect has been used, get sent to the discard pile. The three important parts of this card that we’re concerned with right now are:

You might also notice that the card has a power value of 4, but don’t worry about that right now; it will be explained on a later turn, and doesn't affect playing the Event in any way.

The ability of Apples and Oranges allows John to select one of their Orange or Purple characters (in this case, Twilight Sparkle will do nicely) and give them +1 Orange power and +1 Purple power until the end of the phase. Apples and Oranges is then placed in John's discard pile.

Whenever a character becomes multicolored (meaning when they generate more than one color of power), their total power is based on the combined sum of all their different colored power values. This means that right now, Twilight Sparkle has a total of 3 power that can count as either Purple or Orange power.

Because the effect of Apples and Oranges only lasts until the end of the Main Phase, John must act quickly. He spends 1 action token to play Apple Cobbler, Headstrong to the It's Alive! Problem.

Now that John meets the requirements of the It’s Alive! Problem, he is successfully confronting that Problem. A player scores 1 point every time they confront a Problem, and they also earn bonus points if it's the first time that Problem is being confronted. In this case, It’s Alive! has a bonus points value of 1, meaning that John now has a score of 2 points! He moves his turn card up by two rows to indicate this.

Retrieved from "https://mlpccg.fandom.com/wiki/How_To_Play/Example_Game_(John%27s_Turn_2)?oldid=20488"
Community content is available under CC-BY-SA unless otherwise noted.