My Little Pony Collectible Card Game Wiki
Register
Don't have an account?
Sign In
Advertisement
in: How to Play

How To Play/Example Game (John's Turn 4)

< How To Play
View source 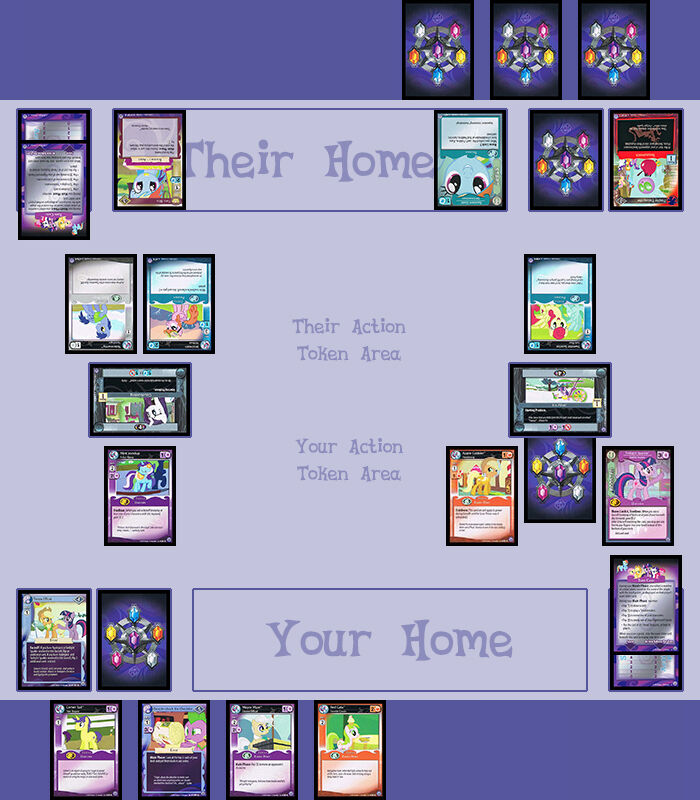 Score: John - 4 Mary - 3
Click on a card to view more information about it!

Currently there is a face-down Troublemaker at the It’s Alive! Problem, but it won’t be flipped face-up until Mary's next Troublemaker Phase, so it won't be able to prevent John from confronting the problem.

Feeling confident in his lead of points, John is going to try and force a double Problem faceoff to gain an even bigger lead. He needs at least three more total power at the Cloudbursting Problem in order to start confronting it; he uses 2 action tokens to play Red Gala, Favorite Cousin and 1 action token to play Comet Tail, Hale Bopper, both to the Cloudbursting Problem.

Before any faceoffs occur, John is still awarded two points for confronting both Problems, giving him a score of six points! However, because both Problems are being confronted by a single player, a double Problem faceoff must occur.

Similar to the Troublemaker faceoff held earlier, the winner of this faceoff will be the player with the most total power between all of their characters at both Problems - even the ones that aren't currently confronting Problems, such as Sweetie Sunrise. It's important to note that Mary's Jetstream has its effect activate now, doubling its power value. 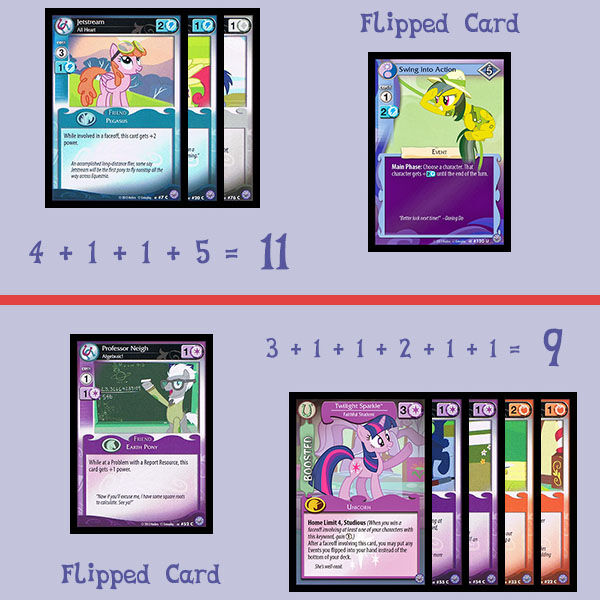 An unexpected outcome! An underdog victory! With a total power of 11, the winner of the double Problem faceoff is Mary!

When a Problem faceoff concludes, that Problem is solved, and all of the characters involved in the faceoff are sent from their Problem(s) straight to Home. At the end of a player's turn, if the number of Friends at that player's Home would exceed their Mane Character's Home Limit, some of those Friends would have to be dismissed (send to the discard pile) by that player. Luckily, John has exactly 4 Friends, so he does not exceed his Home Limit of 4; neither does Mary, with her 3 Friends and her Home Limit of 3.

If the solved Problem(s) had any Resources attached to them, those Resources would be dismissed at this time. Solved Problems are placed on the bottom of their Problem Deck, and the top card of the Problem Deck is flipped face-up to become a new active Problem. Two Problems have been solved, so two new Problems have been revealed: John's Monitor EVERYTHING!, and Mary's It's a Twister!.

Face-down Troublemakers who are at a solved Problem are not dismissed; they will stay around to cause trouble at the next active Problem. 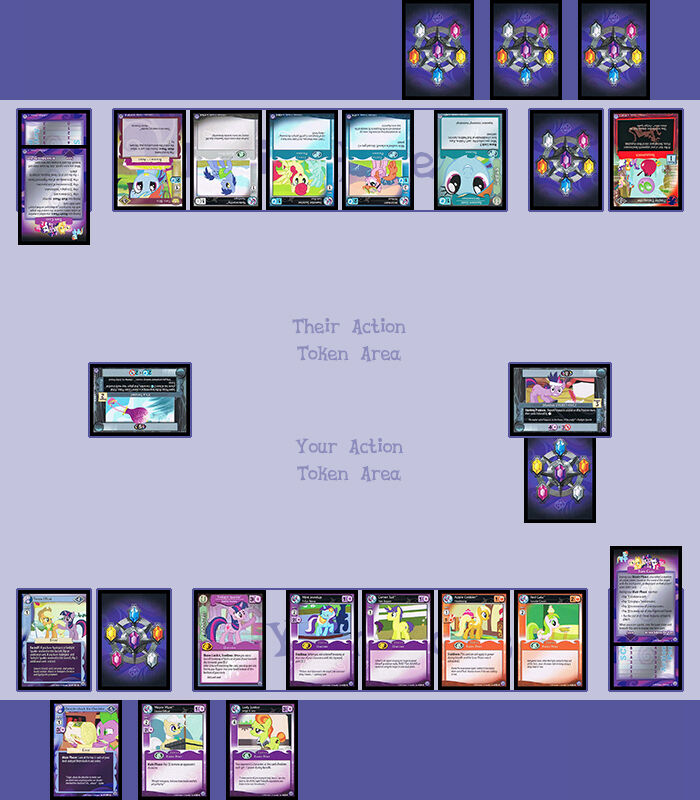 This is the end of our example game; we leave with John having a lead of 6 points to Mary's 4 points, but who knows where the game could go from here!

Hopefully this example game has given you a fair bit of insight on how to play a round of the MLP CCG. If you have any continuing questions, please be sure to check out some of the articles on the Wiki, or leave us a comment or two on how we can address your questions and help others continue to learn.

Community content is available under CC-BY-SA unless otherwise noted.
Advertisement