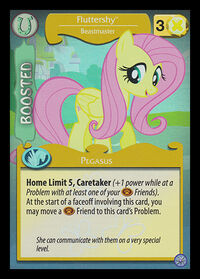 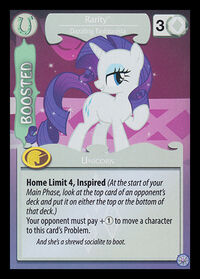 At the very beginning of a player's Main Phase, if they have an Inspired character then they are allowed to look at the top card of an opponent's draw deck and choose whether it remains there, or goes on the bottom of the deck instead. This can be used to stop the opponent from drawing helpful cards and to see what card they'd flip from their draw deck in a Problem faceoff before it happens. Inspired does stack; if you had 3 Inspired characters, you could look at the top 3 cards of the opponent's draw deck and choose the order in which those cards would go on the top and/or bottom of the deck. 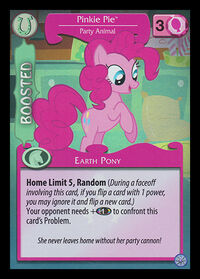 When a player's Random character is involved in a faceoff and that player is unfortunate enough to flip over a card with a power of (exactly) 1, they have the option to ignore that flipped card and instead flip a new card to use instead. Random does stack; a player can use Random a number of times equal to the number of their Random characters involved in the faceoff. 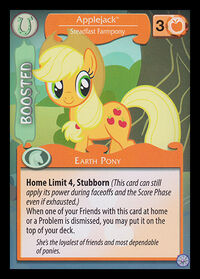 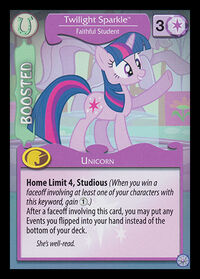 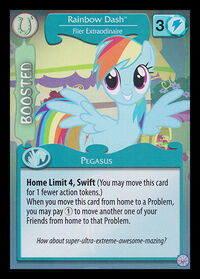 Swift characters take 1 fewer action tokens to move them from location to location. This effect only applies to a player's Main Phase move actions, which normally cost 2 action tokens but would instead only cost 1 action token for a Swift character.
Retrieved from "https://mlpccg.fandom.com/wiki/How_To_Play/Other_Examples_(Character_Keywords)?oldid=20494"
Community content is available under CC-BY-SA unless otherwise noted.