A common piece of game text found on cards is the ability to increase the power of a player's character. Sometimes this increase doesn't have a color associated with it (ex. "+2 power"), while other times the power does have an associated color (ex. "+2 Blue power"). In our Example Game on John's second turn, we had a situation where a character had multiple colors of power at the same time. What exactly does all of this mean? How can you tell how much power of what color(s) a character has access to? In this article, we'll try to give a thorough explanation of power vs. color, and what it means when other cards provide an increase in either colorless power or colored power.

It's very easy to think of a character's power and color as being the exact same thing, they are actually two separate things. The character's power determines how well the character does at confronting Problems, winning faceoffs, and letting its owner play cards with higher requirements. The character's color determines what color of play requirements that character can be used for, if that character can confront any of its owner's Problems, and how it interacts with other cards that target characters with specific colors. It's possible for a character to have multiple colors available to them, but they'll always have a total amount of power available and at least one color with which they can apply that power.

For the following examples, try not to imagine the character Blue Moon, Ol' Blue Eyes as having 2 Purple power. Try instead to imagine it as a character having 2 power and the Purple color. It might not seem like much of a difference at first glance, but as we start to increase this character's power you should be able to see how this difference is important.

Increasing Power (When No Color Is Given)Edit

Keeping the above in mind, we'll look at a simple example of increasing power. Imagine that Blue Moon is at a Problem, and that Action Shot, Shutterbug is played to that same Problem. The +4 power that Blue Moon gains from Action Shot's game text doesn't have any color associated with it, so it's just a simple increase in power. Blue Moon would now have a total of 6 Power, and would still only have its Purple color of power.

Increasing Power (When It's The Same Color)Edit

The Event card Watch in Awe can give a character +2 Purple power. If we play this card on Blue Moon, we get a similar result to the above example. Blue Moon would have a total of 4 power, and since Blue Moon already can use the Purple color of power nothing happens to it available colors. (Blue Moon would not suddenly become "double Purple" or count as 2 Purple characters for using the game text on other cards, etc.)

Increasing Power (When It's Different Colors/Multicolored)Edit

The Event card Royal Guidance can give a Yellow or Purple character +1 Yellow and +1 Purple power. If we look at just the increased Power given by this Event, Blue Moon would have a total of (2 + 1 + 1) = 4 power. In addition, since part of that power was Yellow in color, Blue Moon is now considered to be a multicolored character with access to both Yellow and Purple colors of power. The player who controls Blue Moon would be able to play any card in their hand that has a play requirement of up to 4 Yellow or Purple!

It's important to note that multicolored characters can only use one of their colors to confront problems. Normally the bonus power provided by Royal Guidance only lasts until the end of the Main Phase, but let's imagine that it lasted until the end of the turn instead. In addition, we'll imagine that the empowered Blue Moon is located at its owner's Parasprite Pandemic Problem during the owner's Score Phase. 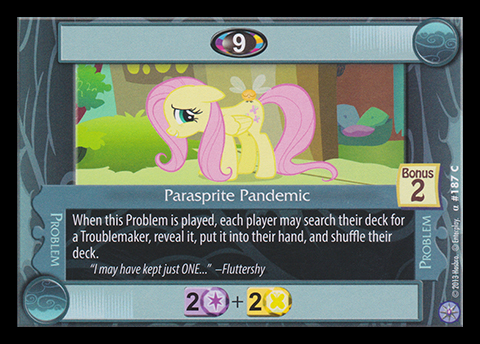 This Problem requires 2 Purple power and 2 Yellow power to confront, however Blue Moon would not be able to provide both of these colors of power at the same time. Its owner would still need at least 2 power of one color or the other in order to start confronting the Problem.

Retrieved from "https://mlpccg.fandom.com/wiki/How_To_Play/Other_Examples_(Power_vs._Color_and_Multicolored_Characters)?oldid=32738"
Community content is available under CC-BY-SA unless otherwise noted.