Here's a game already in progress between Bianca (on the top) and Polly (on the bottom). Let's examine the Mean Meanie Pants Problem: Bianca already has her Rainbow Dash Mane Character boosted, a strong Friend in Holly Dash, Flighty Filly, and a Wild Manticore Troublemaker that is preventing Polly from being able to confront the Problem. Meanwhile, Polly has Flitter, Ribbon Wielder and a face-down Troublemaker that she played last turn. It's the start of her turn right now; after drawing a card and gaining her action tokens, she enters her Troublemaker Phase and reveals her Troublemaker... 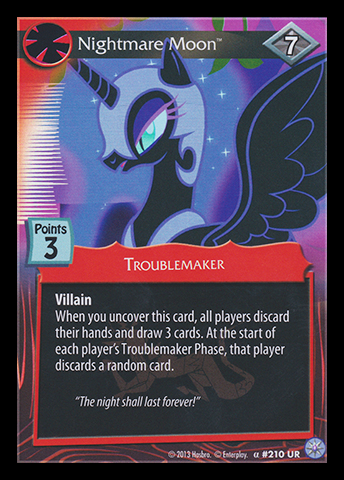 However, this isn't just any run-of-the-mill Troublemaker; it's the Villain, Nightmare Moon! When a Villain is revealed, two things immediately happen: 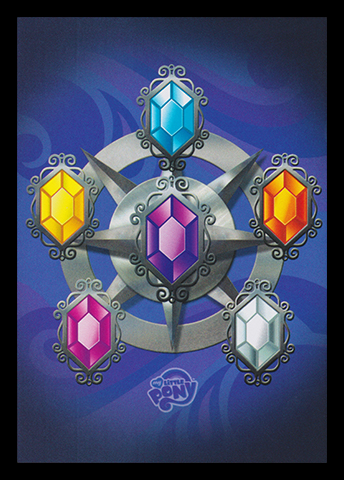 Villains, in addition to other cards, have the ability to frighten Friends. When a card becomes frightened, it is flipped face-down. Any tokens on that card (such as exhausts tokens) are removed and any Resources attached to that card are dismissed.

While it's frightened, a card retains its name and card type. However, all of its other information (such as power, color and traits) are ignored. A frightened Friend is still a Friend, but it has absolutely no Power to do anything with!

There is only one way to fix a frightened card; during their Main Phase, a player can pay 2 action tokens to ready a frightened card, flipping that back face-up. This action is called rallying.

Retrieved from "https://mlpccg.fandom.com/wiki/How_To_Play/Other_Examples_(Villains_and_Frightened_Friends)?oldid=20496"
Community content is available under CC-BY-SA unless otherwise noted.